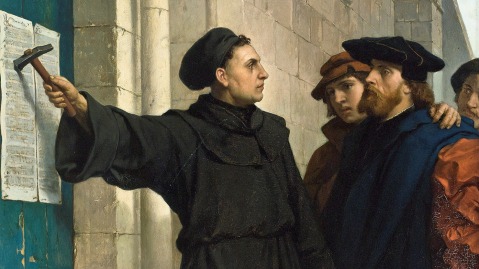 October 31 will be celebrated as the 500th Anniversary of the Protestant Reformation.  It’s an arbitrary date, in many ways.  It ignores earlier reformers like Wycliffe and Huss.  It picks the date when Luther may or may not have posted his “95 Theses on Indulgences”–simply an invitation to debate, so they appeared.  At that point, Luther had not yet fully developed the key Reformation teaching of Justification by Faith Alone.  He wouldn’t be declared to be outside the Catholic church until January 3, 1521, when he was excommunicated. The movement known as Lutheranism wouldn’t be fully developed until the presentation of the Augsburg Confession in 1530.

But this is the date we have, and it will be remembered with posters of Luther nailing his “95 Theses” to the door of the Castle Church in Wittenberg, and congregations singing, “A Mighty Fortress Is Our God,” and with panels of academics (mostly not Lutheran) discussing whether the event has meaning for today (and spending more time apologizing for Luther’s late statements on the Jews than on his proclamation of Justification by Faith Alone).  People of many denominations will claim Luther as their own–like all those non-Irish who adopt St. Patrick as their patron once a year.

I’m not going to academic debates and discussions unless I happen to be a presenter.  I’m not going to go to hear secular choirs and orchestras performing Lutheran chorales, nor to lectures of people of other faiths opine about the Lutheran movement like the six blind men of Indostan.

But I will preach the simple message of the Gospel.  I will excoriate those who seek to mix in human traditions and demands, and who seek to enslave the human heart in legalistic chains. I will point men and women to the Word of God, when it is proclaimed and where it is embodied–wherever they may see and hear and grasp the message that they are made right with God not through their doings nor their lineage nor their beliefs, but when they believe the good news that their sins are forgiven for the sake of Jesus Christ.