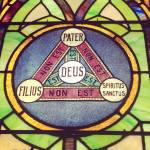 The doctrine of the Trinity was developed over time as the early church sought to preserve the witness of Scripture in the face of new challenges.

The starting point of Scripture is the incarnation, which leads to a certain kind of speaking about God. Jesus, the eternal Word, through whom all was made, who was in the bosom of the Father, became flesh. He prayed to the Father in the Spirit. He breathed the Spirit on the disciples, and they, in the Spirit, offered their prayers to the Father through him. The Spirit intercedes to the Father with groans that can’t be put into Words. The Spirit testifies to Jesus. Jesus sent the disciples to baptize in the name of the Father, and of the Son, and of the Holy Spirit. He forgave sin. He healed. He gave life to the dead. He rose from the dead (having power to lay down his life and to take it again), and is seated at the right of the Father. He will come again.

That’s the starting point for all Trinitarian reflection. There are three, Father, Son and Holy Spirit, related inseparably to one another. Yet there is one God.

The doctrine developed in response to the claims of various heresies that pulled in different directions.

Adoptionism suggested Jesus was a man who was chosen by God, and adopted as his son. Some liberals today embrace this when trying to elevate the humanity of Jesus, to make him “more like us.”

Docetism said Jesus was entirely divine, a spirit himself, who couldn’t really take on human form and suffer, and so only appeared to be human. All Gnosticism embraces this.

Arianism wanted to preserve both the supreme position of the Father and to have a Son who could really be our example, and so posited that Jesus was a kind of demigod, less than God but more than us. There are several Christian sectarians who hold this today, most notably the Jehovah’s Witnesses. The Spirit ends up just as an impersonal force.

Sabellianism, or modalism, said that Father, Son, and Holy Spirit were but roles that the one God has played at different times in human history. You see this view also in the crude analogy comparing the Trinity to the three states of water–solid, liquid, and gas. This is present today in that liberalism which rejects “patriarchal” language and calls God “Creator, Redeemer, and Sanctifier,” giving each person in the Trinity a separate job (in contrast to the orthodox maxim that omnia opera Trinitatis ad extra sunt indivisa.

Tritheism treats God as a committee; it posits three separate beings, but denies the eternal relationships between Father, Son, and Spirit. It specifically rejects the Nicene Creed’s “eternal generation of the Son.” These three “separate but equal” beings kind of flipped a coin to see who would become man–any one of them could have done so. Tritheism is popular today in some academic theologians who claim to be the pure Trinitarians; they advances their agenda by claiming that orthodox Trinitarianism is semi-Arian.

Orthodox theology, in contrast to these, holds that Father, Son, and Holy Spirit are all eternal, and all co-equal. It holds that there is one God, as the Shema declares, but that he exists in three persons or hypostases who share a common substance or ousia. This doesn’t mean that they have a substance. It doesn’t mean that they are persons, as we imagine persons. Rather, the Fathers picked the terms, stripped of their philosophical meaning, just so they could speak about what makes the persons separate as opposed to what unites them. They are three simply in that they relate to one another. They are one God, nonetheless. And though they are equal, they have particular relationships with one another, and these relationships are what allow us to distinguish Father, Son, and Spirit.